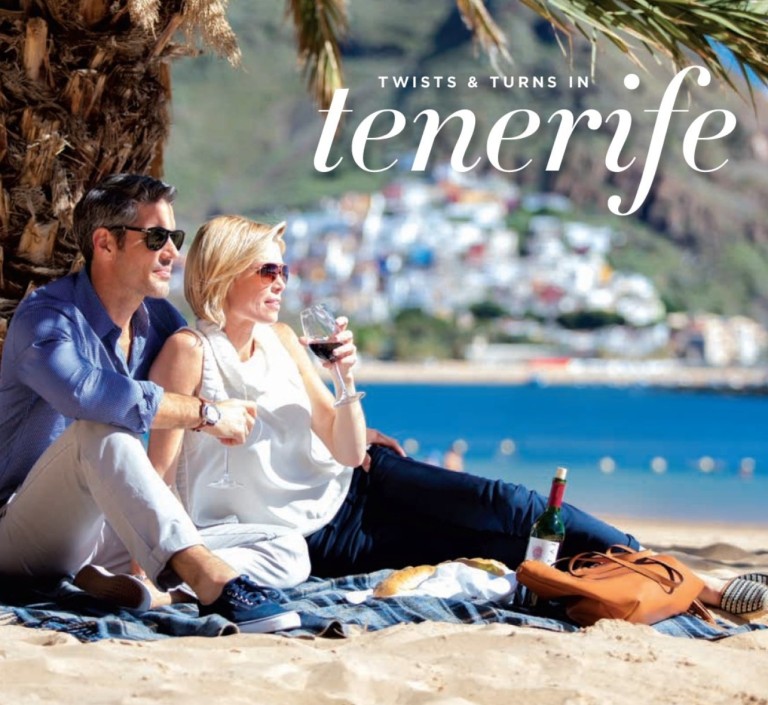 I boarded a small van with a group of strangers. We exchanged pleasantries and discovered that we were all in Tenerife for different reasons, some for pleasure others for business and me for a little of both. But it was our shared love of wine that was the reason for our paths crossing on this impromptu tour.

We set out toward the Sauzal region of Northern Tenerife, and the views were breathtaking, at times you could see the snow-capped peak of the Teide peering through the clouds. When we reached la Casa del Vino (the House of Wine) and I stepped onto the cobbled streets of this quiet village I felt like I had flown back to mainland Europe – even the climate had changed.

In between the lush forest only mere pops of color from neighboring villas could be seen, whether from their terracotta roofs or from the laundry that waved on traditional clotheslines – including a pair of very colorful boxers that made me and my newfound friends giggle like children on a fieldtrip.

The Cord That Connects Us

Through the doors of the 17th century finca (farmhouse) we entered and were welcomed warmly. It was the perfect start of the day, as this vinoteca-cum-museum does a wonderful job in telling the story of Canarian wines.

Tenerife is little known for its vineyards on Spain’s mainland, let alone across the world. Yet, wine has been grown throughout the island for centuries. Tenerife’s fertile soil nourishes several varieties of grape, including the popular Listán variety, and the island is home to no less than five Denominacion de Origen (D.O.) areas. Our group also learned that Tenerife developed its own signature viticulture by creating a system of horizontal braided grapevines, called el cordon trenzado (the braided cord), which are on display at Casa del Vino for a closer look.

We made our way to the tasting room, where local wines are deliciously paired with cheeses. And by the time we were done looking, tasting and shopping, we had all congregated at the outdoor terrace, where the sounds of laughter echoed off the courtyard. Needless to say, our guide had no problem finding us when it was time to board the van toward our next location.

For the Love of White Wine

The day was long and the roads were winding, but the company grew warmer. We visited the Bodega el Lomo in the region of Tegueste. The winery is located in the middle of a seven-acre vineyard that was originally intended for personal consumption. As you can imagine, our group of jokers had a field day with this fun fact.

At our stop at the vineyards at Bodegas Monje, we stood in silence taking in the extraordinary views – not a sound could be heard over the beautiful panoramic vistas over the surrounding countryside and Atlantic sea beyond. That is until we were invited to sample the Listán Negro, when we were reanimated into a deep discussion about the differences between red and white wine. I am of those that strongly prefer reds and this one was exquisite. It tasted like chocolate covered raspberries in a glass. And then I tried the Listán Blanco, grown from century-old vines. Everyone watched my expression of shock and confusion and then laughed at my inevitable request for “un poquito más, por favor,” (a little more wine, please). That’s when I knew that this tour had changed my life, as my new favorite wine was white.

As a newly welcomed member of the white wine club, I was told by a local that I should return to the island at the end of November for the feast of St. Andrew. It’s a day when locals celebrate both their patron saint and the first production of the wine for the year. Puerto de la Cruz stages a pop-up wine market around the harbor to which all the local bodegas come to showcase their wines – all while local children drag strings of empty cans across cobbled streets to create as much racket as they can. In a whispered aside, he told me that the real ticket is to head to the streets of Icod de los Vinos on the eve of the feast where daredevils take to the steep streets to slide down on tablas (boards).

Who knew white wine lovers were such revelers?

At the end of the day, our group was busy exchanging information and comparing calendars, but we quieted down just enough to let our guide get in a few parting words. Man after my own heart, he quoted Shakespeare’s Henry IV, “But I faith, you have drunk too much canaries and that’s a marvelous searching wine, and it perfumes the blood ere one can say: What’s this?”

As it turns out, during Shakespeare´s time, wine from the Canary Islands was quite coveted and imbibed in the courts of Europe. Naturally, mention of this wine made its way into not only the aforementioned, but also in the Twelfth Night and the Merry Wives of Windsor.

At the end of our ride, strangers had become friends – some of which I still keep in touch with today. So perhaps The Bard was right and canary wines do help you find excellent company.