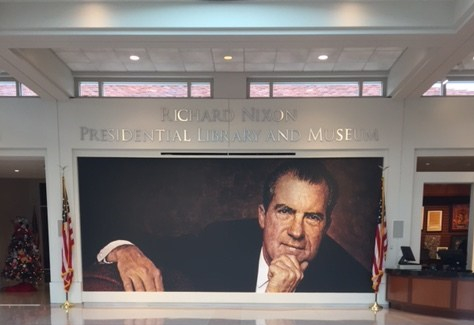 Richard Nixon was a congressman, a senator, a two-term vice-president, a near two-term president, and an adviser to the presidents after him. He was also the first president to resign. All of these are facts I knew thanks to my seventh grade civics report on the 37th POTUS. Years later through movies, books and the Pentagon Papers, I learned that he was racist and paranoid, he held grudges and was grossly power-hungry. Basically he was tremendo H.P.

I love a good villain, so when I found out that Nixon’s Presidential Library and Museum was an hour from LA in Yorba Linda, I gassed up the car and headed inland.

The great thing about the museum is that they don’t shy away from any of it. As a matter of fact, Watergate is the first thing they address during the introductory film. Bota que no es compota.

Now that it’s out of the way, you walk through a series of hallways that set the tone for the era and the events that led to his election. Cool factor 10 is arriving at a replica of Nixon’s Oval Office.

More hallways followed. The Vietnam War, his domestic and international policies, the role of his wife Pat, and his reelection. I can’t describe how much anticipation you feel when you are about to turn the corner into the Watergate section. I could’ve spent the whole day in that corridor. Everything gets covered, from the break-in to the cover-up to the resignation. You can listen to excerpts of the actual tapes and the clicks where the tapes were erased.

For my Cuban historians, have no fear, our people are well represented. Cubans Virgilio González, Bernard L. Barker and Eugenio Rolando Martínez are prominently featured for being three of the five Watergate burglars.

At this point you’re only half way through the museum, because in a Tarantino-like move you get transported back to Nixon’s childhood, as if that’s what the President was thinking about as Marine One lifted from the White House lawn after he resigned.

Before walking out across the grounds (where he and his wife are interred) and touring his birthplace, you have to walk through one last hallway with displays and videos of their funerals (I may have shed a tear).

Having been to Reagan’s Library in Simi Valley, I can tell you that it doesn’t compare to Nixon’s in size or even beauty. But I found this one to be more fascinating and thought-provoking.