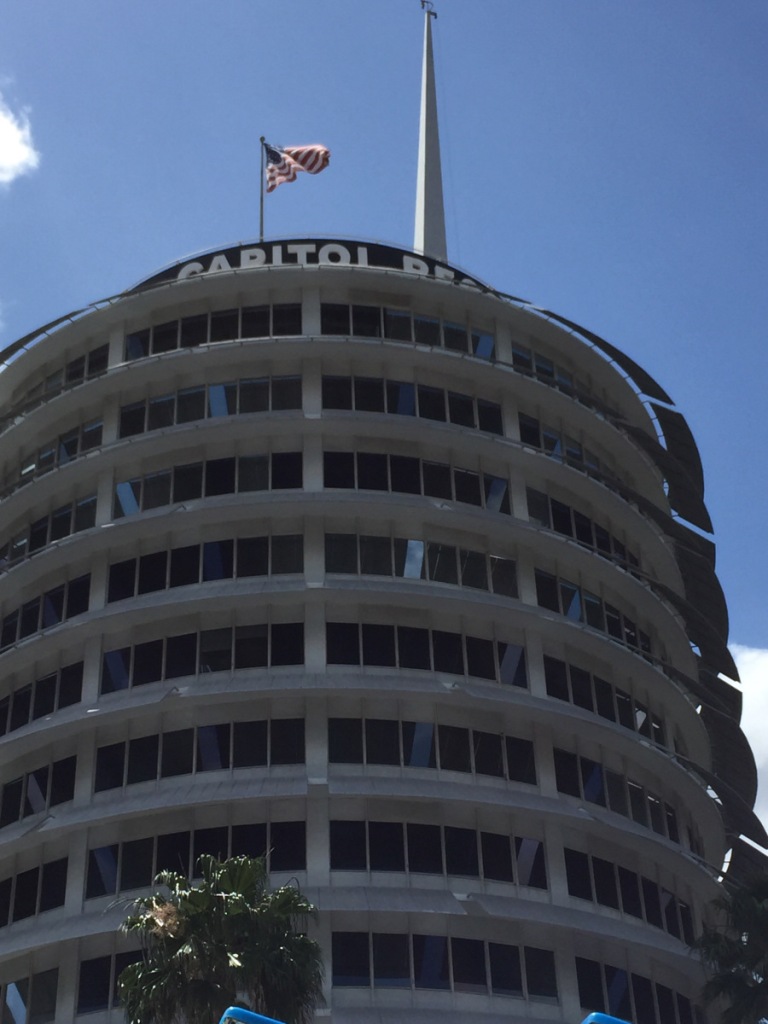 In 1956, Nat King Cole traveled to Cuba to perform at Tropicana, but he couldn’t stay at Hotel Nacional because of the color of his skin.

That same year, 1956, the iconic Capitol Records building was completed. A thirteen-story, earthquake-resistant tower that was the world’s first circular office building. And its nickname became “The House That Nat Built,” because it was he who put the record label on the map.

The inside of Capitol Records is rarely seen by the public. A few minutes as a background in a movie. A few seconds of a live shot of the orchestra during the Academy Awards. That’s it. So, when they offered tours in honor of their 60th anniversary, I jumped at the chance.

Me and a small group of music enthusiasts were escorted to the side entrance and straight into Studio A. Along the way, I was able to snap a few pics of the black and white photos of the musical geniuses that line the corridors. Among them is one of Sir Paul McCartney looking up at the photo of Frank Sinatra, which was taken in the midst of the studio session for Frank Sinatra Conducts Tone Poems of Color, the first album recorded at the tower.

Engineers took the time to explain the massive sound boards and the meticulous measures taken to protect the room’s acoustics. In Studio B, we were told about the subterranean echo chambers and actually heard the difference in reverb using Sam Smith’s vocals on Stay With Me. And finally, in Studio C, we heard the loudest most clearest version of The Who’s Pinball Wizard. So clear in fact, I could hear the pinball machine in the background.

As for Nat, he left his mark on this incredible building. His photos are everywhere, his piano is proudly displayed and his music continues to live on. Back in Havana at the Hotel Nacional, you can find a bust and jukebox in his honor, and thankfully, you won’t find the color code…just the communist code of not letting locals in the hotels, but that’s a story for another time.

If you go:  The Capitol Records Building is not open to the public unless there is a special event. You can get a glimpse of the building, which is located just north of the intersection of Hollywood and Vine.