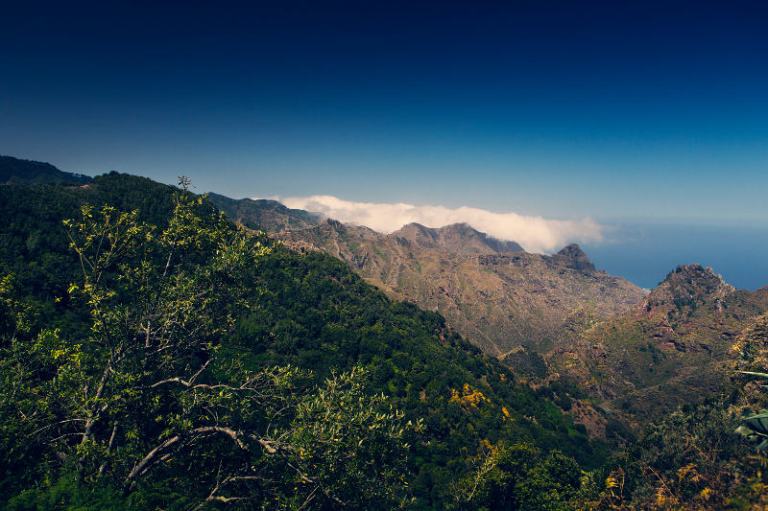 The term Isleña, meaning island girl in Spanish, is what we call my grandmother. A term of endearment exclaimed whenever she walks in the door. ¡Llegó la isleña! (The island girl is here!) I grew up thinking it was a reference to our Cuban heritage, but when I became more inquisitive about our family’s lineage, I discovered that her nickname was a tribute to her Canary Island roots. Her father emigrated to Cuba from Santa Cruz de Tenerife and the nickname, along with a strong emotional connection to Spain, was passed down to her.

Naturally, after confirming my first-ever journey to the Canary Islands, I called my grandmother straight away. Having traveled there often, she assured me that I was going to love it. She rattled off a list of places to see and distant relatives to visit, and then unknowingly said something in passing that became the highlight of my trip.

“Go to the enchanted forest,” she said. “Once you see it, you’ll understand my love of the natural world.”

This piqued by interest. As a child, spending quality time with her always entailed the outdoors, whether fishing or camping. Even in her late-eighties, my grandmother’s green thumb continues to be bionic and she goes bird-watching in the woods. As a life-long city dweller, this was a once-in-a-lifetime opportunity to see the world through her eyes.

On the third day of my stay, after basking on the beach and indulging in the nightlife, I set out from my posh hotel at Playa de Las Americas on the tip island’s southern coast toward the very north of the island in search of this magical place. My grandmother certainly made me work for it, as this hidden forest was part of the Anaga Mountains, a protected natural landscape and a UNESCO World Biosphere Reserve, which required a permit to visit. Luckily, my local guide took care of the details of this adventure.

On my ride out, I watched as the hills obscured the shops, terraced homes and hotel-lined coast. The landscape slowly changed like a clock in retrograde the closer we got to the massive Teide, the tallest mountain in Spain. Like Sicily’s Etna, Mt. Teide is inescapable when you’re on Tenerife. In addition to attracting visitors to the Canary Islands, this UNESCO-deemed World Heritage Site also serves as a proverbial dividing wall, in effect cutting Tenerife in two halves. And now I could appreciate it wasn’t just south to north, but also modern to ancient, man-made to natural.

On the two-hour drive, my guide shared a wealth of information about Tenerife’s history and landscape. I learned that poor economic conditions in the 19th century caused large numbers of Canarians to leave the islands. Many emigrated to Louisiana and Texas in the US, as well as the Dominican Republic, Venezuela, Puerto Rico, and, in my great-grandfather’s case, Cuba. When I explained that I was of Canarian descent and that I was going on this hike because my grandmother recommended it, he laughed.

“Your grandmother did this hike?” he asked incredulously. “Then, she really is una isleña.”

We spoke of my grandmother’s athleticism and adventurous spirit as if he knew her. He felt so familiar and familial, like a long-lost cousin. Perhaps it was the way he spoke Spanish. It was closer to the way I learned it in Miami, than the traditional, lisping Castilian of Madrid. Before arriving at Anaga, we made a stop at the port city of Santa Cruz to stretch our legs and for a little more Cuban history, as this was the hometown of José Martí‘s mother. While the landscape was considerably lusher, it was nothing compared to what I witnessed at the entrance of the Anaga Mountains.

As we entered the protected area, I had trouble catching my breath – and I hadn’t even started to walk yet. Narrow roads branching off to tiny hamlets, deep and steep ravines covered in thick forest, some of which is ancient laurisilva, which is millions of years old. When we reached this secluded starting point of our circular path into the Enchanted Forest, my heart rate was already elevated. It was both thrilling and humbling to be enveloped in ferns that were taller than me, but the true magic happened when a sea of clouds rolled in and it felt like I was flying.

We continued toward Mirador Cabezo del Tejo, for a view of the coast, Taganana, and the beaches of Anaga. In a quiet moment of reflection, I noticed my guide staring at my expression.

“My thighs hurt,” I said smiling.

“Well, you can’t tell your grandmother that,” he said, laughing.