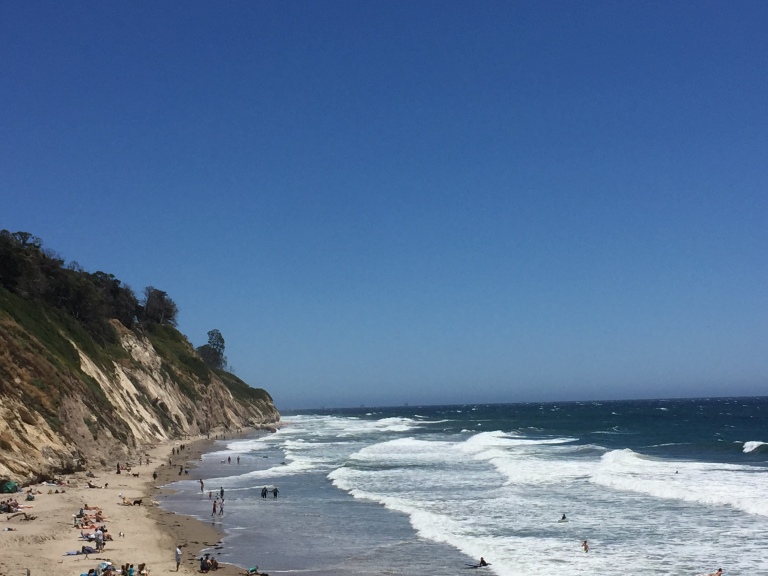 There is something magical about this place. The beach, the cliffs, the flowers, the trees. They all conspire together to thumb its nose at Los Angeles. Yet, Santa Barbara doesn’t need to be compared to another city to be better than. It earns that distinction on its own. If money and means were available to me, it’s where I would call home…at least part of the year.

I’m not alone in California dreaming of a Santa Barbara home. It’s where very many celebrities rest their heads…and bones. One of the most coveted pieces of realty is a spot in the Santa Barbara cemetery. Even the Reagans (Ronald and Nancy) had a plot here, but when it was determined that they would be buried at the Reagan Library in Simi Valley, they sold it for a ridiculous amount of money. I’ve tried to pitch HGTV on a show about cemetery plot flipping, but they haven’t returned my email.

Don’t worry, I won’t bore you with the pitch and I will eventually get to some travel tips about Santa Barbara (skip to the section “Santa Barbara de California” if you can’t wait), but first I want to get into why this place is so special to me. Spoiler alert, it’s in the name.

December 4th is the feast day of bad-ass martyr and former Catholic icon St. Barbara. And if there ever was a saint that held a Cuban passport, it would be her (after la Caridad del Cobre, of course). The legend of Santa Barbara is also quintessentially Cuban. Her super-strict, wealthy dad locked her up in a tower and the few times she was let out, she went straight to where she wasn’t supposed to go — to hang out with those baja clase Catholics and practice their weird fringe religion. She even tried to run away and some h.p. chivaton told her dad where she was hiding.

The story goes that her father chopped off her head with his sword. Apparently, chancletas were not readily available at the time. Don’t despair, though. Her dad was struck by lightning right after he killed her, so even-Steven.

This is why every time — and I mean every, single time — there is a flash of lightning, my mom says, “Ay, Santa Barbara bendita.” She became the patron of gunners, miners, people who work with explosives, and naturally a family whose last name is de Armas.

When African slaves arrived in Cuba, they also found a friend in St. Barbara. She was the perfect cover for their most revered and powerful deity, Chango. The god of thunder and dance and war and, well, all things that relate to testosterone. How did this ultra-macho guy end up being associated with a woman? Among the many stories of the life of Chango is a curios tale of cross-dressing, when he had to dress like a woman to escape a mob that was trying to kill him. I imagine a clueless (and ruthless) Spanish priest lecturing a group of men from Yoruba (behind a pointed gun) about the martyrdom of St. Barbara, thinking he had performed the miracle of conversion, when in reality the guys had found their Chango in drag.

Meanwhile on the Pacific side, another Spaniard, Juan Cabrillo, landed on a particularly lovely place on the California coast on December 4. He named the city, the island and the channel Santa Barbara, finally giving a place for people like Oprah, Ellen, Tom, Whoopie, and Spielberg to live.

Just because your name is not embossed on a star on the Hollywood Walk of Fame, doesn’t mean you can’t enjoy Santa Barbara and all its beauty. From Los Angeles head north and in less than two hours you’ll be in heaven.

There’s an adorable trolley that takes you to all of the landmarks for a nominal fee, but if you don’t want a narrated tour or have an irrational fear of tour guides, you can hop on the shuttle bus that runs on a loop every 30 minutes by the waterfront or every 15 minutes on the downtown route, for only 50 cents. Bring quarters.

If you only have time to do a few things in Santa Barbara, the beach and Stearns Wharf should be your priority. Strike up a conversation with the sand castle artists, rent a bike, get some ice cream, buy some crystals, and get your tarot card reading. It doesn’t get more California than that.

After the beach, head to the Botanic Garden for some forest bathing. At the date of this writing, the garden was not affected by any of the terrible fires. The entrance fee is $14 and is open daily, except holidays.

You should also visit the Old Mission — the chief cultural and historic landmark in the city of Santa Barbara. It’s still home to a community of Franciscan friars (who are rarely seen) and a beautiful church. You can also peruse the museum and gift shop; peek into a cemetery and mausoleum (again, the plot flipping TV show would work here too) and twelve acres of beautifully landscaped gardens. The entrance fee is $12 and is open daily, except holidays. At the time of this writing, the Cave Fire didn’t affect the Old Mission.

And if you really want to be Cuban-meta in this beautiful city, climb up the tower of the Santa Barbara County Courthouse (which is lovely on its own) and whisper, que viva Chango.

Nearly three decades ago, at the passing of my grandmother, I inherited her statue of Santa Barbara. It was her most prized possession (just one of many contradictions in our family of atheists). And as is the unspoken rule, every December 3rd at midnight, a candle is lit, a prayer is said, the Celina y Reutilio record is played, and my grandmother’s tradition lives on.